After having poor performance on all games (e.g. PUBG on very low 50-70 fps), i tried Passmark and i discovered that, compared to others gtx 1060, mine has poor performance on tests of directx 9,10 and 12 (not 11). Watching GPU-Z (during gpu load) i see the PCI Express used is 3.0 x2 instead of 3.0 x16 (i opened the case and on motherboard it's printed "pci express 3 x16"). Could this be the issue? Could it be a fault motherboard?

In BIOS settings there isn't much that can be changed (no options about GPU or PCIe). I tried the GTX 1060 in another computer (i5 6500) and it is seen as pcie x16 and it's working really really better.

Please can you try to help me on the issue?

P.S. i tried reformat, installing all latest drivers, but i didn't solve. I also checked temperatures and they are okay. In Nvidia Panel in info it's saying BUS PCI Express x2 Gen3. 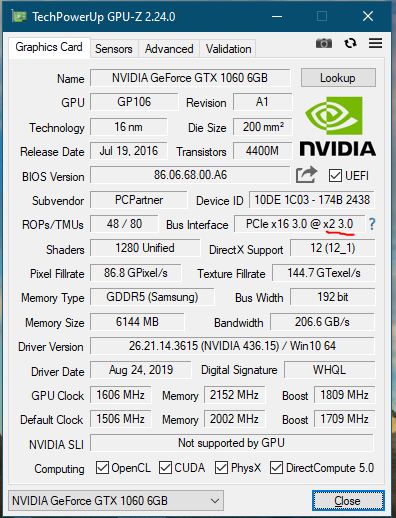