Need support for fixing my Nvidia GPU on my Predator Helios 300.

June 2018 in Predator Laptops
Hello everyone,
I need help fixing my Nvidia GPU on my Acer Predator Helios 300. First of all, the device manager reports that it is not working properly with Code 43.
I've already done clean uninstall with DDU in safe mode and clean install of the Nvidia driver. That did not solve the problem and Code 43 always tends to stick around.
I then looked up my GPU information and found out that the BIOS information for Nvidia GPU is missing (unknown), so I thought that that could be the major problem to all this.
However, when I tried flashing VBIOS of the Nvidia GPU using NVflash, it keeps telling me that "Detecting GPU failed". So I was thinking it was because I do not have the exact
VGA BIOS for this particular model on this particular laptop (which would be Nvidia GeForce GTX 1060 Mobile on Acer Predator Helios 300). I still want to reflash the VGA BIOS for
the Nvidia GPU on my computer, will anyone kindly share with me the VGA BIOS that goes for this Nvidia GPU on this model? I've heard you can use GPU-Z to extract and save your
current VBIOS for your GPU in ROM file format. If anyone can do this for me, I would greatly appreciate.

Also, I am posting these three screenshots that I took to show you what I am talking about. 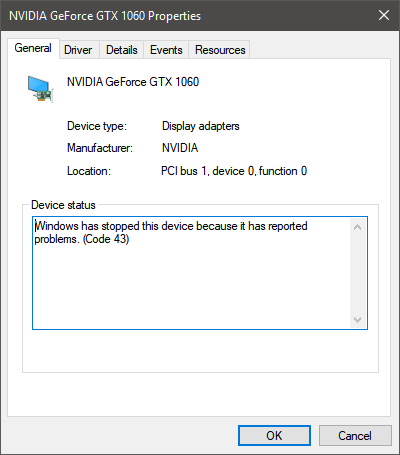 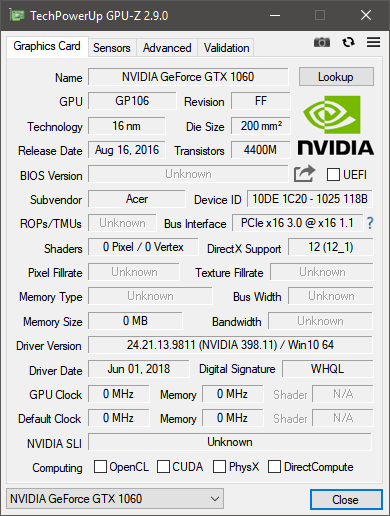