Acer Crew
May 17 in What's Happening 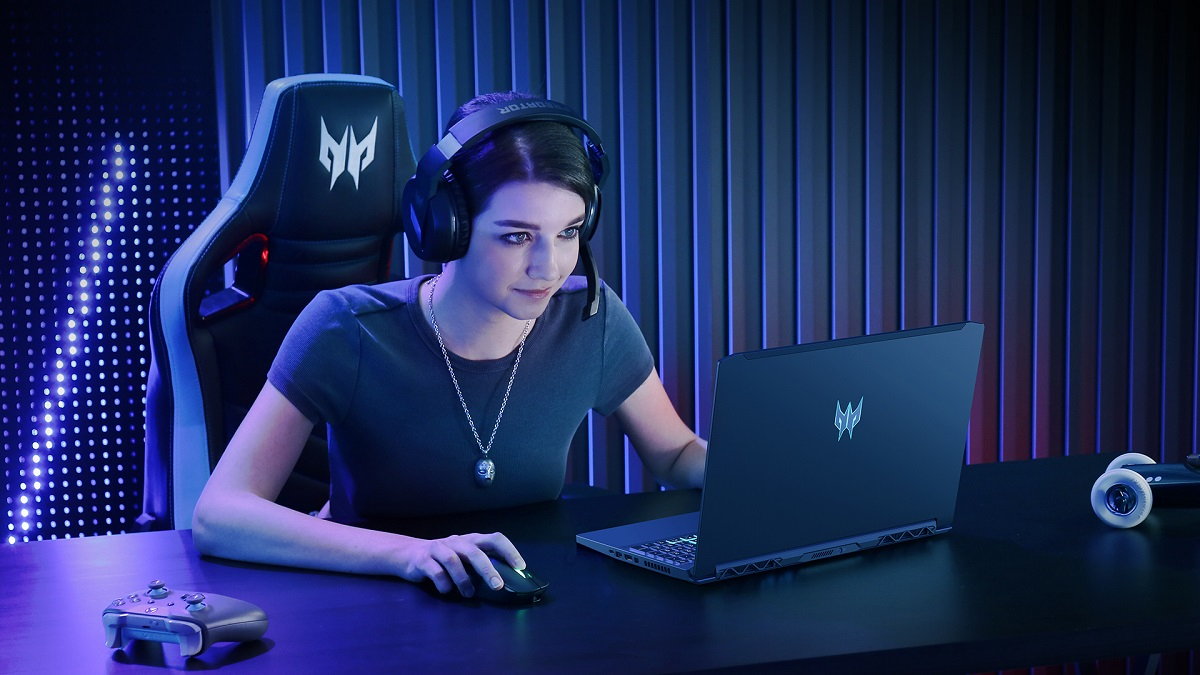 Editor’s Summary
TAIPEI, TAIWAN - Acer announced updates to its popular Predator Triton 300, Predator Helios 300 and Nitro 5 series of gaming notebooks, all of which have been refreshed to take advantage of the latest 11th Gen Intel® Core™ H-series processors and NVIDIA® GeForce RTX™ 30 Series Laptop GPUs—including the new GeForce RTX 3050 and GeForce RTX 3050 Ti. On top of a number of other updates, improvements to the devices’ displays ensure that players will appreciate as much of this power boost as possible.

“The new silicon announced today are as exciting for us at it is for users, as more powerful processors let us push the thermal management capabilities of our devices further than ever,” said James Lin, General Manager, Notebooks, IT Products Business, Acer Inc. “There is a lot of exciting technology coming to the surface right now, and we’re able to offer an excellently tuned package for players of all skill levels. Whether you’re a seasoned pro or investing in your first gaming notebook, this is the time.”
“With 11th Gen Intel Core H-series processors, innovators like Acer can deliver incredible gaming experiences provided by a new architecture that enables frequencies up to 5 GHz, new PCIe Gen 4 for fastest graphics and storage access, and blazing fast connectivity based on the latest Wi-Fi 6E and Thunderbolt 4 technology,” said Ran Senderovitz, Vice President and General Manager, Mobile Products Group, Intel. 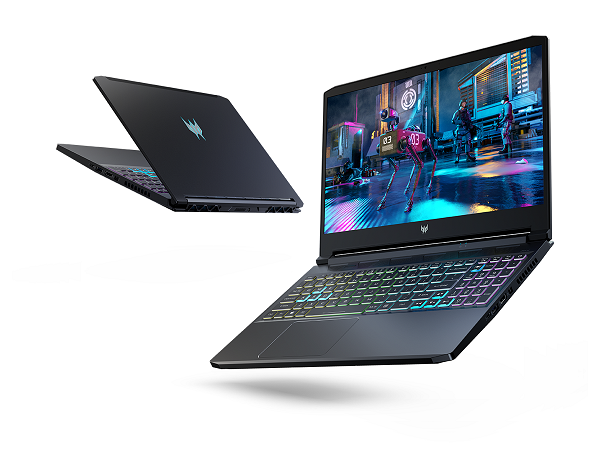 At just 19.9 mm (0.78 in), the Predator Triton 300 (PT315-53) is a beast of a laptop that users can comfortably fit into a backpack or briefcase. The notebook’s all-metal chassis encases an 11th Gen Intel Core H-series processor capable of reaching 4.6 GHz, up to an NVIDIA GeForce RTX 3080 Series Laptop GPU and up to 32GB of DDR4 memory, making it more than capable of tearing through the latest games. From there, users have the choice of funneling this power into one of two directions: those who want their games to come alive can opt for a 165 Hz QHD panel, while those seeking every advantage possible can opt for a blisteringly fast 360 Hz FHD panel. Topping it all off, a 3 ms overdrive response[1] ensures that kicking the laptop into high-gear is a tear-free and seamless experience.

The laptop utilizes a dual-fan approach to keep everything running cool while in the thick of a demanding game, one of which is the latest 5th Gen AeroBlade™ 3D fan. These custom-engineered fans leverage eighty-nine 0.08 mm (0.003 in) metal blades and a bionic wing tip design that allows for greater airflow intake with minimal turbulence, resulting in 55% better airflow than a plastic fan[2]. Pushing the cooling envelope further, dedicated heat pipes for the GPU and CPU in addition to strategically placed intake and exhaust vents help to maximize cooling efficiency, ultimately leading to increased performance.

A backlit 4-zone RGB keyboard lets each user add a personal flair to the notebook, while colored WASD and arrow key caps make the movement keys stand out. DTS® X:Ultra audio turns any pair of headphones or speakers into a 360° surround sound system, helping to make your opponents’ movements stand out, too—or imbuing your favorite music and movies with real-world spatial sound. Intel® Killer™ E2600G Ethernet, Intel™ Killer™ Wi-Fi 6 AX1650i and Control Center 2.0 allow for less latency, and a range of ports give players lots of options. With HDMI 2.1 for plugging into an external display, a pair of USB 3.2 Gen 1 ports and one USB 3.2 Gen 2 port, Mini DisplayPort 1.4 and USB Type-C (Thunderbolt™ 4), the peripheral possibilities are nearly endless. 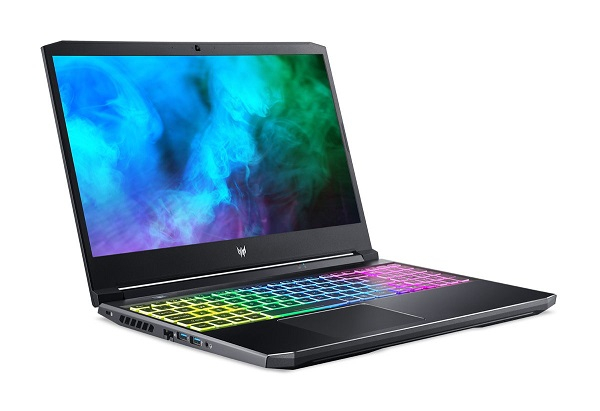 The new Predator Helios 300 comes with everything gamers need to conquer the competition, starting with up to the latest 11th Gen Intel Core H-series processors, an NVIDIA® GeForce RTX™ 3070 Laptop GPU and up to 32 GB of DDR4 RAM. All of this power is supported by Acer’s 5th Gen AeroBlade™ 3D Fan. The 17-inch model further includes Acer’s Vortex Flow Design concept, a strategically organized cooling layout designed to generate aerodynamic flows to enhance cooling on the CPU and GPU, and additionally lower the chassis’ skin temperature.

This power manifests on one of two display options: a blisteringly fast 360 hz FHD panel or a truly beautiful 165 Hz QHD one. Both boast a 3 ms overdrive response[1], so kicking either panel into high gear is a seamless experience with minimal ghosting. These good looks extend to the keyboard, which has been equipped with 4 RGB zones and see-through concave-shaped caps on the WASD keys. Deviating from a standard keyboard, this notebook also comes with a Turbo key for instant overclocking and a PredatorSense™ key that opens Predator’s custom utility app for monitoring or overclocking the system, customizing all of that RGB, and more.

The notebook includes an Intel® Killer™ E2600 ethernet controller, Intel® Killer™ Wi-FI 6 AX1650i and Control Center 2.0 for low latencies and a more reliable connection, plus DTS:X Ultra. The notebook also offers a full range of USB 3.2 ports, including the incredibly fast Thunderbolt™ 4 USB-C with support for DisplayPort functionality and power delivery. An HDMI 2.1 port is also included, allowing gamers to easily connect to an external monitor. As a final touch, a 2TB HDD provides plenty of space for all of the games in a user’s library. 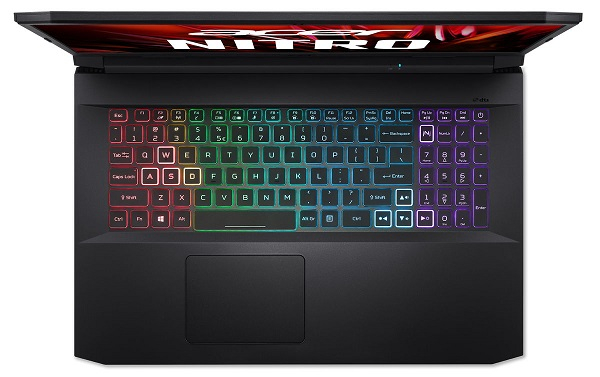 This generation of the Nitro 5 packs a serious punch, boasting up to the latest 11th Gen Intel Core H-series processor, an NVIDIA GeForce RTX 3070 Series Laptop GPU and 32 GB of DDR4 RAM. These powerful specs propel the notebook’s 15.6- (AN515-57) or 17.3-inch (AN517-54) QHD IPS[3] display to a 165 Hz refresh rate with a 3 ms response time[1], while an 80% screen-to-body ratio lets players see more of the action and less of the bezels. In addition to speed, the Nitro 5 also goes big on storage: a pair of M.2 PCIe / SATA SSDs[1] slots offer up to a massive 1 TB Raid 0 SSD or 2 TB HDD of memory so players can keep all of their games, movies and stream footage on hand.

A variety of custom Acer technology works to keep that hardware running as cool as possible—Acer Coolboost™ technology, dual-fans, a strategically placed air intake and an exhaust with four vents—allowing for a 10% improvement in fan speed and a 9% increase in CPU/GPU cooling when compared to auto mode. For situations where not as much power is needed, a dedicated NitroSense key gives users the ability to monitor system performance, select from preset cooling modes or customize their own, plus access a variety of other system tweaks like LCD overdrive or Acer TrueHarmony’s™ six different sound modes.

The Acer Nitro 5 package is topped off with a few fun features and convenient touches. Four-zone RGB[1] lets users take command of the keyboard, which offers 1.6 mm of travel on each key, and an all-black Precision Touchpad. The notebook also comes with a host of connectivity options, including an RJ45 and HDMI 2.1 port, a USB 3.2 Gen 2 port and two Gen 1 ports, plus a USB Type-C™ (Thunderbolt™ 4) port. As a final small touch, the charging port has been moved to the pack of the device for a cleaner, more organized look.

[1] Non-native response time. Achieved via LCD Overdrive
[2] The performance is based on the comparison with same dimension of engineering sample and plastic fan. Actual airflow will vary based on site conditions, size of fan and other factors.
[3] All brands and product names mentioned herein include trademarks of their respective companies and are used solely to describe or identify the products